... those are the words of a seven year-old. He tells eagerly what he has picked up from his grandfather's stories. It's just before Christmas 1974 in a classroom at Rydsnas primary school in Ydre. Teacher and class are discussing last weekend's episode of The Emigrants on TV, which has been seen by many of the children. The teacher, somewhat astonished, looks at the boy who insists that Vilhelm Moberg's Karl Oskar emigrated to North America from nearby Sjoarp. She is not to blame - it was not generally known at this time that there might actually be some truth to the boy's story. 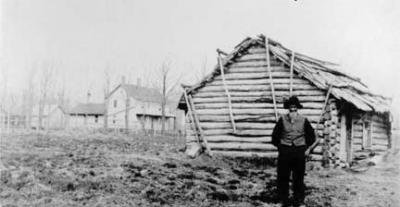 Andrew in front of his shanty at Clearwater Lake. Behind you can see the house where Andrew was living at the time of this photograph (1885). The shanty was built in 1855. On the right hand side behind the boy, one of his class-mates is listening with great interest. He absorbs the information and keeps it in his memory. Through the years he sometimes returns in his thoughts to the things he heard on that school day back in 1974. He thinks and daydreams about Karl Oskar, Sjoarp and North America, but he never looks up the facts. He does not try to find out what really happened, for fear that his fantasies and imaginations would be destroyed if it all turned out not to be true.

It is not until 1998 that he gets to hear more of the story about Andrew Peterson from Sjoarp, when Vastra Ryds Folklore Society gets Professor Roger Mc Knigths Doctors Thesis "Parallels and Influences, Mobergs Emigrantnovels and the journals of Andrew Peterson" His dreams and fantasies are not destroyed after all, they are just a little altered...

Andrew in front of his shanty at Clearwater Lake. Behind you can see the house where Andrew was living at the time of this photograph (1885). The shanty was built in 1855.