2015 was a fantastic year concerning the memory of Andrew and Elsa Petersons familys settler-story, which is one of the main purposes for The Andrew Peterson Society:

One Swedish Cd record with narrations was produced and released in June by The Andrew Peterson Society about the diaries and much more.

Professor Roger Mc Knight visited us in Ydre and Kinda kommunes during the American Festival Week in July, and the week was very successful.

Jan Hermelin released one Swedish Musical CD record: "Andrew och Elsa Peterson - den äkta pionjärhistorien" and one English Musical CD record: "Andrew and Elsa Peterson - the true pioneers" If you want to see pictures and hear some music from the fun and successful release tour in The Midwest you can do it here: https://www.youtube.com/watch?v=ORo52y1hgIg

Carver County Historical Society owns from December 1 -15 all the old buildings that Andrew Peterson once built on his farmstead, and CCHS are determined to save them all.

Vastra Ryd Local Folklore Society arranged an Andrew Peterson Day in the summer of 1998, 100 years after Andrew Peterson´s death. The event took place in Sjoarp - the farm where Andrew was born and raised. A memorial stone was placed along the road to the farm, and solemnly unveiled on this day. The occasion attracted some 800 visitors, many of whom wore period costumes, which created an authentic atmosphere.

In the summer and fall of 2002, there was an exhibition based on Andrew Peterson´s life. It was shown at Byggnadsvard Qvarnarp in Eksjo and in the former vicarage of Vastra Ryd. During the exhibition, a group of people finally decided to do what had long been discussed, and the Andrew Peterson Society (A.P.S.) was founded. 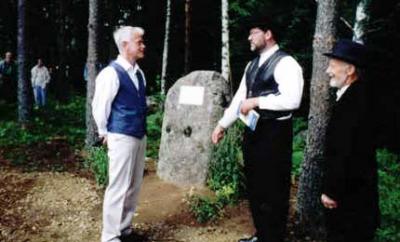 The Andrew Peterson Society is a non-profit association with many great ideas and visions that we intend to implement in the near future. The association´s declaration of intent contains the following:

To attain these goals the purpose of the society shall be:

• to initiate and carry out research into Andrew Peterson´s life, and to compile an account of his achievements and the times in which he lived

• to preserve and care for the environment, buildings and documents pertaining to Andrew Peterson and the time in which he lived

• to make the amassed body of knowledge and the collected material available to the public.

The wording is deliberately rather unspecific since it was difficult to foresee the future or where it will all end up. Our research about emigration may start with Andrew Peterson and then lead on to other interesting areas of study that can not be foreseen, so therefore it would not be wise to make the statutes too rigid and limit our area of work at this time. At present the projects include the following:

Until 2007 Andrew Peterson’s diarie’s only existed on microfilm in Sweden. But after a lot of studies and writing during 2005 and 2006 from members in our Society, the diarie’s are now more accessible and available in our exhibition.

There is a lot of material available in the form of books, articles, photos, genealogic material etc. that also are being organized into our existing permanent exhibition with the easy-to-find archives about Andrew Peterson.

Andrew Petersons farm in Waconia is an object of very great interest. We want to support the careful restoration and the long-term preservation of the buildings and the entire farm area. Carver County Historical Society who now owns the farmbuildings have nice and great ideas how to save all the cultural values.

There is now a lot of literature in Swedish about Andrew Peterson, which we plan to translate into English. We also want to increase the english part of our/this websight during 2016 and ahead.

This is by no means all that the Andrew Peterson Society plans to do, only some examples of what we are working on at the moment.

As mentioned before there are plenty of ideas and visions in the Andrew Peterson Society. However, at present the missing component is funding. Up until now, the whole project has been done with the help of willing volunteers who have generously donated their own time and energy and money. We think it has been and still is fascinating and a privilege to work with the Andrew Peterson project, but with more people to help, volunteering their time, and providing funding we can achieve our goals faster and in the near future. Everyone is welcome to join us as members of the Andrew Peterson Society. If you are interested in joining or wish to support us in some way otherwise, please do not hesitate to contact us.